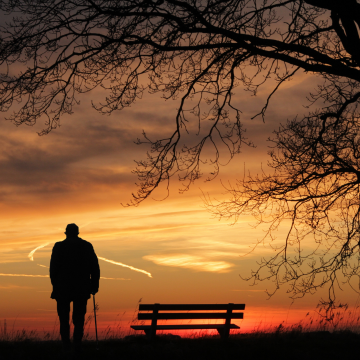 Statistics show that 1 in 5 Americans over 65 are considered “elder orphans” –  defined as those of us who are aging without family to provide care. This statistic does not consider the many seniors who have a family but do not live nearby. When I founded Hope Senior Home Care 18 years ago, my mission was to be an integral part of our client’s care team, including their family, medical team, and my Hope team. Some of our clients do not have family nearby, or their children live out of the area. We are their only support, and we take that role seriously.

When a client has dementia, the situation can be particularly challenging. Our client is often unable to understand their circumstances and make decisions for their care and safety. Without someone checking on them regularly, their need for care (and the progression of the disease) often goes unnoticed for years. It is usually a drastic event such as a fall and hospital stay that brings the need for care to someone’s attention.

I’d like to share a story with you. It’s 7 pm on a Sunday night. A social worker at our local hospital, who I work with often, calls me as I’m settling down to enjoy my evening. She has a patient, James, who has come into the Emergency Room after a fall outside. A Jogger discovered him on her evening run and dialed 911. James heads to the hospital in an ambulance, and he is all alone. The staff quickly realized that James may have mild dementia. When they asked James if he had family they could call, the only person was a sister who lived out of the area. James’ sister was also elderly and would not be able to travel to his home to help out. When the social worker called me, I headed to the hospital, and this is where our Journey with James begins.

Fortunately, James had no severe injuries and was discharged later that evening. I drove James home to get him settled and discovered a home that had not been cleaned or kept up in years. I quickly realized his home was not a safe place for him to live in, alone. After cleaning up a little, making James something to eat, and getting him settled in bed, I headed home around 2 am. The following day I reached out to his sister and learned that there was no one in the area to help James. His sister suggested that James move into an assisted living, and I agreed to help her find a Senior Living Community for James. However, when presented with this approach, James disclosed that this was against his wishes. He insisted that he wanted to stay in his home and refused to consider moving. While frustrated, his sister agreed. But James needed care, and his home was not safe to live in. With no one else to turn to, his sister asked us to help.

We immediately jumped into action. First, we hired a company to come into his home and declutter. Second, a team of caregivers from Hope went in and thoroughly cleaned. We discovered that James was taking a few medications, but the prescriptions were old and had not been renewed in quite some time. We called his doctor and found that James had not shown up to his last appointment over a year earlier. Most of the food in James’ refrigerator and cupboards had expired. James was relatively thin, and his hygiene was not the best. Overall, James was in pretty good health. Most of his issues were due to his inability to handle his daily living needs. And with no one checking on James regularly, things had gotten out of hand.

Third, we developed a care plan to help James while still giving him some independence. Hope became his family, and we communicated daily with his sister so that she would not worry. Initially, James was very reluctant to have caregivers in his home, but he quickly adjusted and began to enjoy the companionship. With our assistance, James’ hygiene improved. We discovered that James had friends he had not seen in quite some time, embarrassed to have them come to his home. With a newly clean home, he began to allow friends to visit. Our caregivers provided grocery shopping and home-cooked meals, and James started to put some weight back on. We scheduled his doctor appointments and accompanied him to his visits, serving as his advocate. Once James started to take his medications, he began to feel better. The caregivers would take him on outings, something he had not been able to do in a long time. We organized social gatherings at his home, restaurants, and friends’ homes. We encouraged him to assist with daily chores, such as housecleaning, meal preparation, and laundry. James’ sense of purpose returned, and his mental health improved (I suspect James had become depressed). We provide 6 hours of service each day, 3 hours in the morning and 3 hours at night. This allows us to help James get up, start his day, and “tuck” him in for the night. With someone visiting every day, any decline will be noticed immediately and dealt with before it can become more serious.

While I wish James were our only “Elder Orphan,” this is not the case. We have many clients where we are the only support they have. We take our role seriously and provide care and support from our hearts as if they are our own family. It takes a village to care for our elderly. If you have an elderly neighbor, please check on them often. Sometimes their community is all that they have.