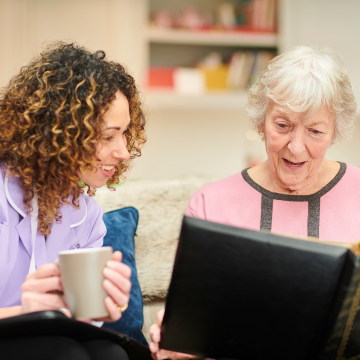 June is Alzheimer’s & Brain Awareness Month. There is no cure for Alzheimer’s disease, and once someone begins to show signs of memory loss, there are, unfortunately, no treatments to stop or reverse the progression of the disease. Certain medications can ease some of the symptoms in people, and there are actions you can take to help slow down Alzheimer’s. Like with many chronic diseases, diet and stress can play a critical role in the trajectory of Alzheimer’s. Suppose you have a loved one with Dementia or Alzheimer’s or feel you are at risk of developing dementia. In that case, the following suggestions may help slow down the development or prevent a future diagnosis.

Today, let’s talk about what a healthy balanced diet means. According to an article on the Mayo Clinic website, there are 15 simple diet tweaks that could lower your Alzheimer’s risk. In observational studies based on the DASH diet (designed to lower blood pressure) and the Mediterranean diet (designated as a heart-healthy diet), the MIND diet was created as a combination of both. The studies indicated that the MIND diet may reduce the risk of developing Alzheimer’s Disease by up to 53 percent. The following items comprise the MIND diet:

You don’t have to follow the diet perfectly to benefit. However, the study shows that those who followed the diet more closely benefited the most. Creating a new habit takes time. Consider initially targeting 1 or 2 of the above practices and go from there. Eating a healthy diet and eliminating stress are critical factors in preventing disease. But it is never too late to improve your health and wellness. Just because you have been diagnosed with a chronic illness doesn’t mean you have to throw in the towel.